Congratulations to Sumo Logic on the IPO! And for Revolutionizing DevSecOps with Continuous Intelligence 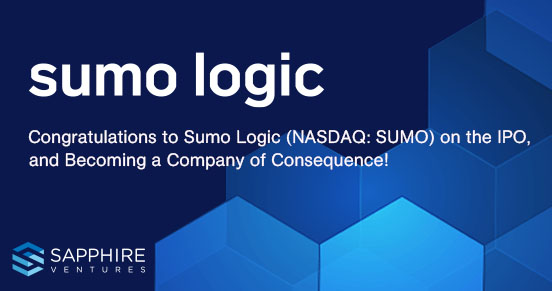 Today is another exciting day at Sapphire Ventures! Sumo Logic (NASDAQ: SUMO), a leader in continuous intelligence and one of our portfolio companies, became a company of consequence and went public on the NASDAQ Stock Market.

With its Continuous Intelligence Platform, Sumo Logic enables its customers to parse information collected from their enterprise apps and integrations to help pinpoint operational and security issues. Since its founding in 2010, the company has been a key player in the DevSecOps space, which stands for development, security and operations and is the philosophy of integrating security within DevOps. It involves creating a ‘Security as Code’ culture with ongoing, flexible collaboration between release engineers and security teams. Ultimately, the goal of DevSecOps and Sumo Logic has been to create new solutions for complex software development processes within an agile framework.

We’re incredibly proud of the leadership team at Sumo Logic, and their achievement of leading the company to this point. From the time we first invested in Sumo Logic three years ago, we were certain that it would become a company of consequence, and we’ve been honored to partner with the team along their journey. We live in a hyper competitive world where organizations can succeed or fail based on real-time intelligence. In other words, a company’s livelihood depends on how it understands and responds to what is happening inside their business, and the infrastructure that runs all its critical systems.

We’ve been following Sumo Logic since 2013. And over the years, we’ve seen it evolve into an enterprise cloud-native analytics platform for DevSecOps teams that manage the transition of enterprise infrastructure from data-centers to public and hybrid clouds. While back then this was a growing market and one we felt was propelling forward, what struck us as more important was that the company had brought in Ramin Sayar as its new CEO at the end of 2014.

Prior to Sumo Logic, Ramin spent nearly 20 years working in product management, strategy and leadership roles at enterprise technology companies including VMware, HP Software Technology, TIBCO and AOL. Since Ramin joined Sumo Logic, he accelerated the company’s transition to focus on the enterprise. So in June 2017, Sapphire Ventures led Sumo Logic’s Series F $75 million funding round. Since our investment, it has been extraordinary to see Ramin and his team grow the company across product, talent and revenues.

“One of the reasons we partnered with Sapphire back in 2017 was because the investment team had a strong understanding of the market and business critical fundamentals that are required for a company to scale up to and through an IPO,” said Ramin Sayar, CEO of Sumo Logic.

Leading up to today’s IPO, the Sapphire investment and Portfolio Growth teams have worked with Sumo Logic on many different activities. Sapphire helped facilitate numerous customer and partner introductions, provided go-to-market support, helped with talent needs and enabled Sumo Logic to gain broader exposure across the enterprise community with various executive and industry events. We’ve had a fun ride together and are excited for this next stage of growth for Sumo Logic.

“Sapphire’s passion and commitment to helping Sumo Logic over the past few years has been impressive. As we approached going public, Sapphire was there with us lock-step, asking the right questions and providing useful advice. They have the best mix of investors, operators, technologists and services professionals. And they have a massive network to help with a variety of needs, which is probably one of the best kept secrets in the industry,” said Ramin Sayar, CEO of Sumo Logic.