Congratulations to JFrog! An Iconic IPO that Highlights the Coming-of-Age of DevOps 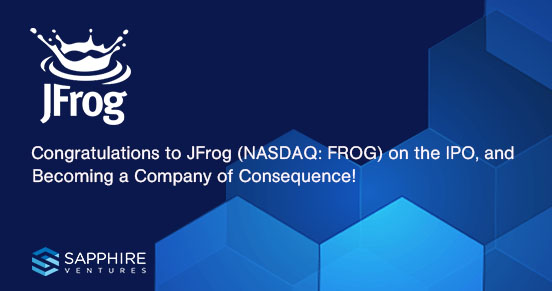 Today is an incredibly exciting day at Sapphire Ventures. Our portfolio company JFrog (NASDAQ: FROG), which is transforming how enterprises manage and release software updates, went public on the NASDAQ Stock Market.

More than 10 years ago, the JFrog team developed the world’s first universal artifact platform. Artifacts are a by-product of the software development process, and the metadata accumulated about artifacts is essential for reusing code and improving the build process. Artifacts are commonly stored in a repository like JFrog so they can be retrieved on demand and shared across teams. By enabling software development and deployment teams to continuously and securely build, deploy and run software updates, JFrog ushered in an entirely new era in Development Operations (DevOps).

We couldn’t be more proud of the JFrog management team, and their outstanding achievement of building a company of consequence and leading the company to become public. From our very first investment in JFrog in 2016, we knew what they were doing was special, and have been fortunate to have been part of their journey to-date.

The majority of today’s businesses are software companies. As such, they depend on software to create applications and experiences to better engage with their customers, partners and employees. Which is why the continuous and reliable release of new software has become mission critical. Companies that fail to keep their software current or react to problems with timely updates risk losing  revenue, harming their brand’s reputation and even worse, threatening human safety and lives.

As companies race to rapidly release software to meet the demands for new applications and ongoing updates, they need a new platform to support them. The traditional approach of different teams developing and deploying software is time-consuming and no longer effective. JFrog’s DevOps platform has played a powerful role in improving the process of building, securing and deploying software in this new era of infinitely scalable cloud computing.

JFrog changed the paradigm by encouraging collaboration and communication between software development and deployment teams, which has accelerated the pace of work, accommodated faster release schedules and improved the quality of software. With JFrog, there is no end state when it comes to software updates–it’s an always-on process that’s secure, continuous and delivers value to users, ultimately enabling a world of version-less software.

Our Big Bet on the JFrog Team, Company Vision and Future of DevOps Pays Off

Sapphire Ventures first met CEO and co-founder Shlomi Ben Haim and the JFrog team in November 2015. One of the first things that stood out to us was JFrog’s highly efficient financial metrics, which they continue to deliver on today. It was unlike something we’ve seen before. But even more appealing was the product vision JFrog’s Chief Data Scientist and co-Founder Fred Simon and Chief Technology Officer and co-Founder Yoav Landman outlined. The DevOps platform they were creating would accelerate the building and deployment of software, and made us believe that JFrog was on its way to become a company of consequence.

In January 2016, we participated in JFrog’s $50 million Series C financing. At the time, this was one of the largest DevOps investments made by a venture firm, and it was Sapphire’s first bet in the DevOps space. But Atlassian had just gone public around that time, so we were convinced that DevOps would be a huge market. It became clear to us that all software would be eventually developed, deployed and operated by the same team, which had to be agile and collaborative to respond quickly to customer demands and changing market needs.

Four years later, and we’ve been able to partner with Shlomi and JFrog many times over across our investment and Portfolio Growth teams, supporting business development, talent and more. Over the last several years, we’ve been able to build a true partnership and are thrilled for JFrog and this next chapter of the company’s growth as a public company.

“We’re pleased to have partnered with Sapphire for more than four years now. From the beginning, the team has felt like family and we’ve received incredible value from the investment and services teams. It was extremely important for us to choose the right partners as we scaled the company. It’s not only about growth, but also the technology and community and, more than anything else, the culture that you care about as a founder. Jai Das has led this partnership on Sapphire’s end, and his vast experience as an investor coupled with the mindset of a developer is a unique combination you don’t see that often in the VC market–this has been a perfect match for us throughout our work together. I’m grateful and honored to be part of the Sapphire family both pre- and post-IPO.” — Shlomi Ben-Haim, CEO and co-Founder, JFrog.